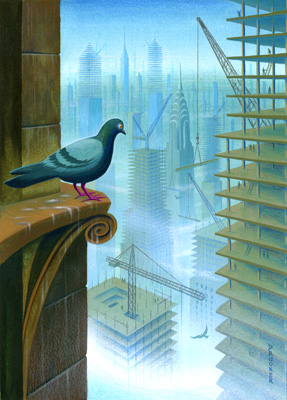 Eric Drooker‘s musical slide show presentation at Modern Times tonight was a gas as usual. He played banjo and narrated a (strictly analog) slide show made up of graphic novel excerpts, paintings, and photos from a recent trip to Palestine. When he got to this pigeon painting, a cover he’d done for The New Yorker, he told a story. In doing some research, looking for pigeon pictures from which to draw inspiration, he learned that pigeons are known in some circles as rock doves. He said he liked thinking of them that way, thinking about being in a city, surrounded by doves.

And it’s true, right? Right. It’s nice to think of pigeons not as pigeons but as doves.

2 thoughts on “Rock Doves: An Exercise in Thinking Positive”