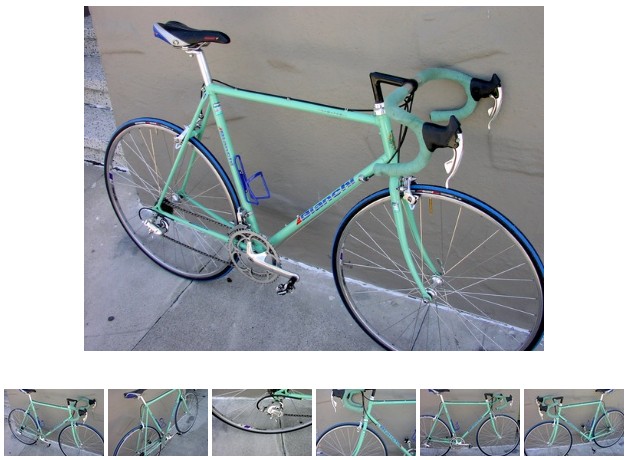 Jen got in touch a little bit ago to share the following harrowing story. Her boyfriend had this bike that they both loved more than anything in the world, and it got stolen outside Safeway in March. Today, it popped up for sale on Craigslist.

Photos in Jen’s photostream prove the bike is their bike. Also:

Things to note: we added the SPD pedals. I don’t have photos of them, but we added them after the fact. (P.S. It’s my boyfriend’s bike, but I bought it and found it and I have a wicked attachment to it, so I obnoxiously call it “our bike”.) You can see the SPD pedals in the photo of all four bikes, but they’re small.

The CL ad mentions that the tires and seat are new. You’ll note those are different from our photo. Pay attention to the photos of the Campy rims, the way the handlebars are wrapped (cables underneath tape), shape of crank, Campy logos on derailleurs and crank arms and whatnot. It is absolutely ours, with no question.

We bought it from Danny – if you frequent the CL bikes section at all, he’s a dude that posts a lot of bikes from San Jose. Cash, no receipt. It’s an old Bianchi. Bought it in December, added pedals in January, kept everything else the same, stolen in March outside of the 16th Street Safeway. The only thing we have is a receipt for the pedals that’s coming from Ohio via mail as we speak. :(

We talked it over and decided to do this post, if for no other reason than to get the story out there. Advice welcome.

42 thoughts on “Stolen Bike Found! (For Sale on Craigslist)”