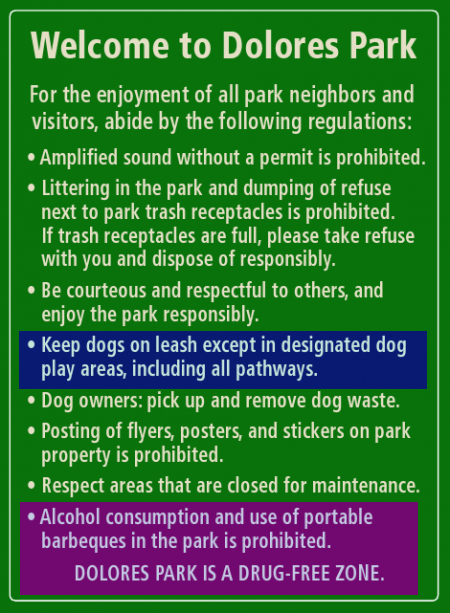 I know this looks newsy, but feel free to pay attention anyway. Reader A. tonight forwarded along an internal email memo circulated by the group SafeCleanGreen Mission Dolores. The memo, titled “Dolores Park Progress Report,” updates members on progress made on each of a number of concerns and initiatives.

The thing is, with improvement comes sacrifice apparently. They are down on dogs, big events, drinking and drugs — things that absolutely make Dolores Park the bastion of freedom and fun so many of us know and love. And maybe that’s fine. Change can be good.

But when a group angling for change lauds increased police presence for its ability to “dampen the spirits of those who are inclined to come to DP for unfettered drinking and carousing,” it gives us pause. We are wary of any organization so giddy about dampening the spirits of others.

The memo says, “Rec&Park recognizes the need to set a new tone in the park.” And maybe that’s true. Maybe somebody needs to remind people more forcefully to pick up their god damn trash.

But should that job be entrusted to a closed organization? The group’s website explains:

“SafeCleanGreen membership is by invitation or referral only. To join, please email and tell us a little bit about yourself and how you found out about us. Be sure to include your address and contact information. You’ll hear back shortly from our Yahoo Group Moderator.”

In any case, maybe it is the end of an era. Maybe it’s time for dogs to be on leashes and community events to be denied permits. Maybe this group is on the right track. Or, maybe they’re a mobilized minority trying to flip the script on a beloved national treasure behind everyone’s back. This is not for us to say. And this is not a call to action, as this is not a call-to-action type blog. But if citizens outside this closed organization have an opinion to voice too, the memo name drops Dolores Park Park Manager Bob Palacio ( bob.palacio@sfgov.org ) and Supervisor Bevan Dufty ( Bevan.Dufty@sfgov.org ).

Full memo after the jump.

Many of you attended our Friday, August 7th meeting in Sup. Bevan Dufty’s office. I’ve already sent a synopsis of the meeting, but want to give you an update on a number of developments and commitments that Rec&Park and others have made since then:

1. Police presence in the park. You may have noticed a substantial increase in police presence in the park. Last weekend, SFPD had a van parked in the middle of the park and 3 bicycle officers riding around the park. There had also been press coverage talking of a “crackdown” at DP. While this is overstated (it’s more presence than enforcement of park codes, but it’s a great start), the combined effect has been to dampen the spirits of those who are inclined to come to DP for unfettered drinking and carousing. We have a long way to go, but I hope this is the beginning of setting a new climate. Thank you, Captain Tacchini!

2. Amplified sound events with a permit. Rec&Park has promised that once the current permits issued last year are fulfilled, it is greatly reducing the number of permits issued for future large events in DP.

3. Amplified sound events WITHOUT a permit. We have agreement from Capt. Tacchini of Mission Police Station that all officers working in or around DP will have a list of all permitted events in the park. Rec&Park has agreed to provide this info on a regular basis to SFPD. The idea ultimately, is for officers to take a proactive approach: if they hear amped sound, they simply consult their list, and if not on the list, they can take action, thus eliminating the need for residents to always complain before a loud unpermitted event is shut down. We’re far from having this new policy solidly in place, but it’s a start, and in the meantime, I encourage you to always call the non-emerg. number 553-0123 whenever you hear amplified sound that is going on without a permit. Contact Bob Palacio, DP manager, at bob.palacio@sfgov.org and he can supply you with a current list of permitted events (i.e., if it’s on the list, it ain’t legal!). It’s really important that we keep SFPD informed of what’s going on in the park, and don’t allow things to return to the way they were before. Let’s keep the momentum going.

4. New and improved signage (see example att’d): Rec&Park will soon install large park rules signs at each corner of the park (similar to ones in Duboce Park), reminding people that there are in fact regulations regarding permits, amplified sound, alcohol, drugs, trash and litter, etc. It is also working on other signs as well, (hopefully ones like “LEAVE NO TRACE” , ‘PACK IT IN, PACK IT OUT!”) Rec&Park recognizes the need to set a new tone in the park. Signage is a basic component of the public education and consciousness-raising campaign we are advocating.

5. Trash receptacles: Clearly, there are not enough trash bins in the park, and nobody really likes the ugly graffiti-laden black and blue toters. In the near future, RPD will install 4 new 4×8′ concrete foundation pads on the side strip of Dolores from 18th to 20th, each holding 4 concrete trash receptacles (total 16 bins). The black and blue toters now chained to the regular receptacles will be removed. In addition, each concrete pad on which the bins will sit will be accompanied by an 8′ red no parking strip on the adjoining curb to enable Sunset Scavenger to easily access the bins, something that has heretofore been a real problem. RPD is still mulling over how to deal with recyclables. We are lobbying for theft (bear)-proof bins, but due to cost that may have to wait for the renovation. Theft of recyclables and the mess created by dumpster divers is a serious problem begging for a solution.

7. 18th and Dolores gateway: This abused corner where the grass has been worn bare, will very soon be landscaped with drought-tolerant ornamentals, bordered by a low (not for sitting) retaining wall of pressure-treated timber. The area around the sidewalk corner will be decomposed granite, anticipating that people will still want to round out the corner by taking a shortcut.

8. Gardeners/laborers in the park: During the next 6 weeks, Rec&Park will deploy work crews in the park M-F from 9-11 am fixing the irrigation system, weeding the planter beds and dealing with other issues that need attention.

9. Embracing park volunteers: At our August 7 meeting, we made it clear that we wanted RPD to take a new attitude about volunteers and embrace their role in keeping the park clean. We are planning a meeting on Wed., Sept. 16, 7pm at Dolores Park Church Community Building, 65 Dorland, to talk about the formation of a new group (working tltle “Dolores Park Stewards.”) Forming this group is in recognition of the fact that RPD simply cannot do the job alone, and if we as citizens want real and sustainable improvement, we’re going to have to get personally involved.

10. The BIG DP renovation: Of course, the most important change we anticipate is the bond measure renovation of Dolores Park—over $15 million including the renovation of the children’s playground. Fundamental issues like the disgusting bathrooms, the turf, recycle bins, the soccer field, designated off-leash areas for dogs, etc. will have to wait until then, but we will all want to give our feedback in neighborhood meetings when they start.

11. Our next meeting with Bevan et al. Supervisor Dufty rightly commented at our last meeting that we don’t meet with him and other city officials often enough, and tend to wait until we’re in “crisis mode”. Fair enough. So, we are having another meeting with him in October (not yet scheduled) and will continue to do so on some regular basis. This future meeting will follow up on some of the promised improvements in the park and will report on our own Sept. 16 meeting to discuss formation of the volunteer group. That about sums in up for now. Any comments you might have are most welcome. And anyone who wishes to be part of our new group, Dolores Park Stewards, and is willing to come to meetings and or volunteer toward this effort, please let me know and you’re invited to our Sept. 16 meeting.

No one should have a biography at age 24. View all posts by Kevin Montgomery