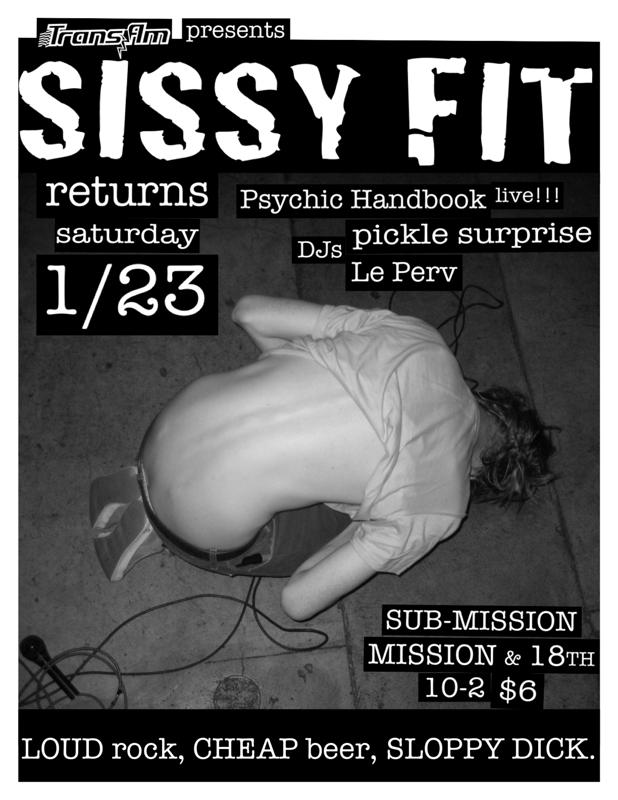 You would think there would be more gay events in the Mission. Most of the rest of America would call the boys here “fags”. Statistically speaking, a lot of them probably are.

So good thing Bill of TransAm Presents tells us:

I throw a gay rock ‘n’ roll dance party called Sissy Fit every month at Sub Mission (usually 3rd Saturday but it varies sometimes)….  The Mission may be hipster central, but it’s a veritable no-man’s-land for gays.  We’re hoping to build that bridge with Sissy Fit.  Every month features two DJs spinning post-punk, punk, classic hardcore and jagged new wave, plus a live band and some Trannyshack-style drag performances.

I never thought I’d see a flyer for a gay dance club that had a pale skinny dude in lieu of some ultra-tanned hunk with an 8-pack, but hey it’s 2010! Seriously though, that shit is offensive towards men. If you don’t like working out or drinking protein shakes that’s cool with us. Love your bodies, fellas.

I own a sword. I like to write. I am a software engineer for pandora.com. I am a gypsy jazz guitarist. View all posts by Vic Wong