Some recent pop art found around the neighborhood. Pop art… get it? Because it’s bubble gum. More sidewalk art (in amazing 3D) after the bump.

END_OF_DOCUMENT_TOKEN_TO_BE_REPLACED

Is this an effective use of spray paint? Circle one: y/n

END_OF_DOCUMENT_TOKEN_TO_BE_REPLACED

So, just in case you were wondering: the gentleman decked out in festive attire made from chicken feet and tinfoil wandering last Sunday’s Noise Pop & Shop at Public Works wasn’t completely crazy. That was none other than visionary artist Jason Jaworski, fresh from the scene of his latest performance. See? Art – the more you know!

END_OF_DOCUMENT_TOKEN_TO_BE_REPLACED

Shitty Kitty is back from Morocco!

“As always, Telephone and Soup will bring the comic-making supplies, you bring your friends and shittiest ideas.”

I can’t quite tell if this epic Sirron Norris painting is a paean to Muni past or a biting critique into present Muni woes. 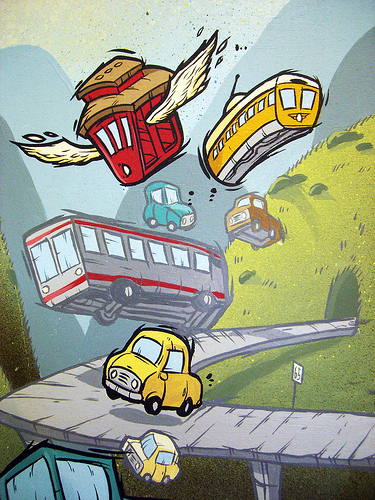 (Is that a 26 Valencia floating off into the sunset? All I know is I’m loving that pickup truck.) 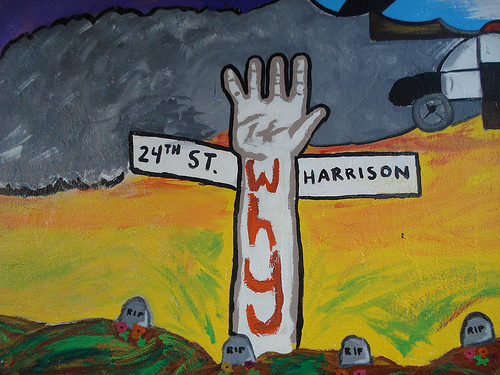 I always knew that art galleries were evil because artists are hippies that vote for democrats, but I never knew that they are one of the reasons the Mission is being gentrified:

Editor – I celebrate the representation of art in all its forms, whether it be in museums, on public walls or in galleries (“Artists take it to the street (Valencia),” Aug. 22). However, it should be noted that it is often the artists and gallery owners who move into low-rent neighborhoods who plant the seeds of gentrification. While the growing number of galleries in the Mission District may be engaging a new audience, high-rent condominiums are being built only blocks away, where bakeries, grocery stores and community centers used to stand. I fear the day when the Mission will have to take a new name because the Latino residents and businesses can no longer afford to stay in the neighborhood they worked so hard to build.

Maybe people disagree with me, but I think the neighborhood could still keep the name “Mission” even if there were no Latinos, given that it was the Mission back when it was mostly Irish and German.  Oh, and Ohlone slaves initially built the Mission.  Sorry, Rachel.