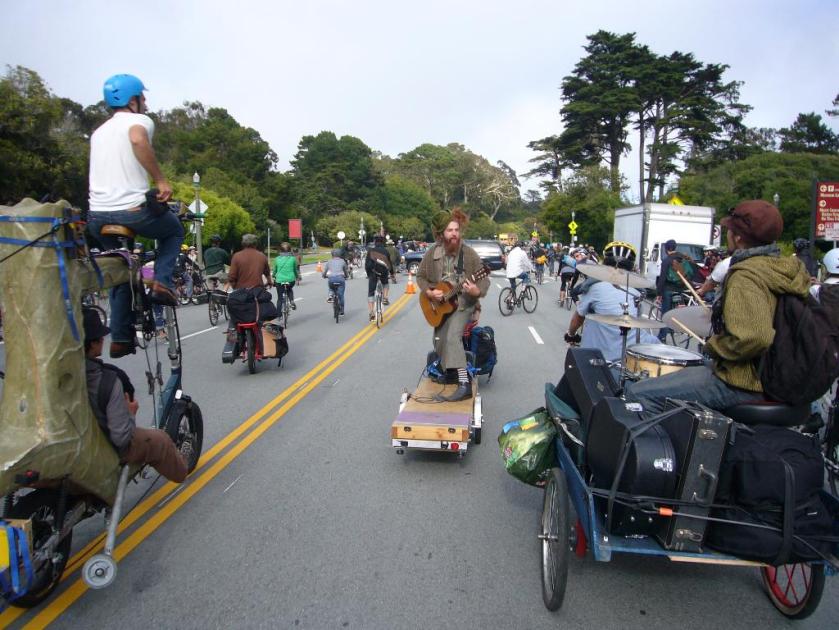 After hanging at GG Park for an afternoon listening to tunes amplified by cycle-powered generators, the Bicycle Music Festival finally took to the streets.  Obo Martin and his band were joined by Fossil Fool to provide music for the ride.  Each instrument was on a different platform towed by a bicycle, and it sounded pretty good whenever they stayed together!  The drummer kept falling back though, probably owing to the bulkiness of his craft.  Always the drummer.

Check out the crush of cyclists as they approach Divisadero and then swell down Fell past this poor overwhelmed videographer who ends up in the middle of all of it:

Many more photos available at the Bicycle Music Festival website.

Here’s a clip of Judgement Day destroying the Bicycle Music Festival today in Golden Gate Park. I’ve never had my face melted by a violin and cello before!

The cyclists in front are powering all of the equipment. You’ve just got to check out the rig. The wheels spin the rotor of a generator that feeds into a small battery with just enough juice to keep things going for a few seconds. A meter shows the power level. If it drops below green, lights out. This actually happened shortly after I stopped filming and everyone was treated to an unexpected drum solo. While I was pedaling, I found a direct correlation with the power level and the bass instruments. Kick drums and bass lines really draw a lot of power!

You can still catch the rest of the fest when it rides down to Potrero Hill (16th and Irwin) around 6pm.

The Bicycle Music Festival is back!  What better way to spend a sunny Saturday than biking down city streets with a bunch of fellow cyclists in the middle of huge rolling concert?

The fun starts in Speedway Meadow in Golden Gate Park at 12 Noon for a bushel of bands headlined by Sean Hayes.  At 5pm the party gets rolling through the streets (the full map of the ride can be seen here), with bicycle rapper Fossil Fool leading the way on his crazy double-decker musical cycling contraption (seen in the awesome GIF up there by Burrito Justice).

The route goes through Dolores Park (where, if last year is any indication, a few bands might post up and play),  Valencia,  24th Street, and Harrison, before looping back to 16th and finishing the party up at Showplace Triangle.  See you there!