There is a hanged pigeon outside my window. I take no joy in this. Evidence seems inconclusive to me as far as cause of death. Accidental? Maybe it got caught in this plastic bag and then hooked on the fence. Murder? A trap? Dinner?

UPDATE: I climbed up and freed the bird, also getting what I believe to be an answer to the primary question. Any guesses?

Don’t invest in owl statue stock today. I have a feeling the entire pigeon scareowl industry is going down as the result of this damning snap at 16th and Capp that Mr. Eric Sir posted yesterday.

While we may sit back and laugh at the apparent stupidity of the pigeons, sometimes I question whether we’re any less stupid.

That’s right, it’s time to start paying attention to pigeons. They don’t seem to have a problem chowing down on their fellow birdkind. They’ve even learned to ride BART. Next they’ll be taking our jobs and they wont need us around anymore. Hitchcock was right.

Arlen captured this sad pigeon a few months back.

Could this explain the tragic pigeon cannibalism we see all too often in the Mission? Kind of like when hungry Looney Tunes characters see each other as dinner?

Though let’s be honest — this is in poor taste. Cheetos suck when compared to Hawkins Cheezies.

These are *so* much better than Cheetos you have NO IDEA. Hell, *I’d* eat a pigeon if it had a bag of Cheezies on its head.

(Also, the image search for Cheetos is pretty damn freaky.) 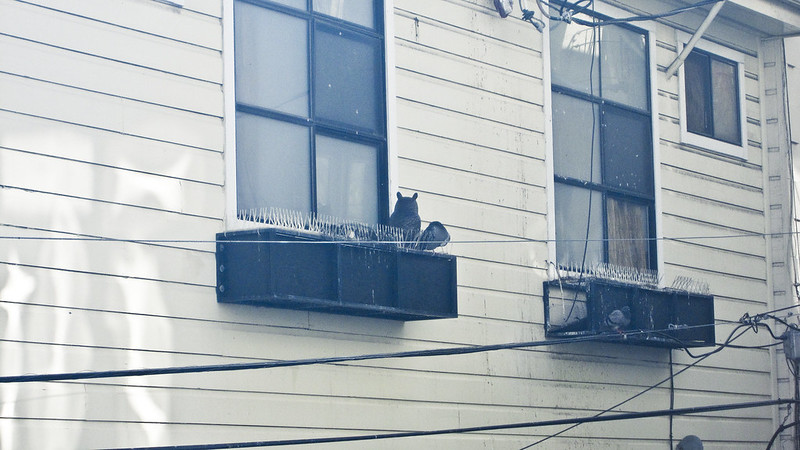 This alley pigeon is sitting between bird spikes and canoodling with a plastic owl. In the war on pigeons, we are losing.

MM reader John B. recently took a vacation to Hawaii to get away from the pigeony grit that coats our fair neighborhood, but it didn’t exactly work out the way he planned:

we kayaked up the wailua river, went on a short hike to this waterfall and the first thing we saw was this nasty ass, broke down island pigeon.  i know pigeons are a big topic on mm, thought i’d warn you of one place you may not want to go if you’re trying to take a vacation from pigeons.

This pigeon seems to be enjoying a fairly envious life, unlike this curious little fellow I found on Mission Street yesterday (after the jump, NotSafeForMoms, but scientists are encouraged)

END_OF_DOCUMENT_TOKEN_TO_BE_REPLACED

From the comments thread of the previous post, Christopher F. Smith‘s fine tale of a 16th and Mission original.

Here’s the thing. Many property owners in San Francisco seem to think that life size owl statues placed as if perching on the edge of the rooftops will be a deterrent to the local pigeon population. I can go along with that as an idea. The scarecrow, right? Sounds good. But does it actually work? Internet people, via search engines, seem to think that they don’t work unless they’re selling them.

I decided to do something similar to what an actual journalist would do and took a look around.

Here we find a little trio (they’re not a “gang” just because they’re chilling together) relaxing on some garbage cans under the watchful eyes of the owl. No threat here. No thought that the “owl”, a natural predator, would ever swoop down and snatch them up. Are they co-existing or do they even notice?

Here we see two pigeons hanging with two owls. No problem. Everyone’s cool. Jokes on us, they’re actually having a good time together. They enjoy the company.

My thought, the pigeons (Rock Dove sounds nicer) are such urban creatures that they don’t recognize that the owls are supposed to resemble another bird. They think it’s part of a Community Thrift pickup that was left behind. They’d no sooner expect it to come down upon them like a fierce beast of fury than they would cower under an old broken Mr. Coffee.

What do you people think? In any case, I enjoy seeing fake owls around. I think we should mix it up, though. A vulture here and there. Maybe two swans to make pigeons fall in love. A dodo to make them feel superior. Then a peacock to bring them back down to size.

Look at that pigeon!  It’s learned to eat at the dinner table like a civilized person!  Over here they just eat from the gutter, or resort to (gasp!) cannibalism.

What other good manners can our pigeon population learn from their East Coast brethren?

The Final Taboo Broken at Mission and Van Ness

Pigeons Ate a Horse Down to the Bone on 24th

Mission-based artiste, Hellen Jo drew this portrait of singer, songwriter, fashion-troll Lady Gaga. I’m not particularly hip to the music of today, but I think it’s pretty bitchin’. On her site you can see the whole “making of” process.

Hellen is pictured below, to the right.

First it was just a blindfolded Barbie™ top on the roof of a car. Then it got complicated.

I was walking down 17th Street and stopped when I recognized a familiar landmark. I noticed a pigeon standing on the roof, eyeing the torso with sideways glances. I was thinking about what the next level of this situation could look like when a man came out of Maverick and started speaking to me.

“Are you the owner of this car?”
“No.”
“Oh. Well, we’ve been trying to figure out how to get this pigeon to skull fuck the Barbie™ for a while.”

Then he put a piece of bread on her head and we both watched and waited.

I suggested a trail, which he was already on top of. As he made the little bread path the bird got embarrassed and uncomfortable and flew away.

You know, in all the movies I have ever seen, it has always been piranhas, killer ants, or Hannibal Lecter that will eat an animal down to the bone.  I’ll never be able to look at pigeons the same ever again.

From our tipster, Jon:

snapped these on my way to work this morning on 24th St. around Harrison, I believe. The guy next to me said, “I think it’s a horse.”

Last week I wanted to know how plug1’s pigeon photo turned out.  Now we know.

Plug1 and Plug2 are the subjects of the latest installment in the I Live Here: SF project.  I really want to know Plug1’s pigeon picture turned out.